I said my piece [for the time being] yesterday. Still waiting on my white Christians to stand in solidarity with their brothers and sisters in Ferguson.

In the meantime, some meditations for this Sabbath day.

This passage came to mind this morning while I was thinking about calls for “peace” amid unjust circumstances where the rule of law isn’t applied to law enforcement behaviors:

They have healed the wound of my people lightly, saying, ‘Peace, peace,’ when there is no peace. Were they ashamed when they committed abomination? No, they were not at all ashamed; they did not know how to blush. (Jeremiah 6:14-15 ESV)

White supremacy has taught him that all people of color are threats irrespective of their behavior. Capitalism has taught him that, at all costs, his property can and must be protected. Patriarchy has taught him that his masculinity has to be proved by the willingness to conquer fear through aggression; that it would be unmanly to ask questions before taking action. Mass media then brings us the news of this in a newspeak manner that sounds almost jocular and celebratory, as though no tragedy has happened, as though the sacrifice of a young life was necessary to uphold property values and white patriarchal honor. Viewers are encouraged to feel sympathy for the white male home owner who made a mistake. The fact that this mistake led to the violent death of an innocent young man does not register; the narrative is worded in a manner that encourages viewers to identify with the one who made the mistake by doing what we are led to feel we might all do to “protect our property at all costs from any sense of perceived threat.” This is what the worship of death looks like.

Christena Cleveland, The Cross and the Molotov Cocktail:

Can you see the suffering Christ in the oppressed, even the ones who aren’t responding perfectly to society’s oppression? Christ doesn’t just suffer for the innocent, the ones who don’t have the energy to fight back, or the ones who perfectly respond to injustice. He suffers for the ones who suffer now and sin in their suffering.

And make no mistake, our God is a God of justice. The young black men who launch Molotov cocktails at the police are misappropriating God’s justice by taking it into their own hands, but the rage they feel is the rage that God feels towards injustice. In a sense, they are imaging forth God’s justice to an unjust world.

Seeing the suffering Christ in these young men isn’t achieved by theological gymnastics, deep pity, or altruism. It’s done by listening to their stories, sharing life, standing in solidarity with them, and experiencing their rage.

The integrity of the church is at stake because when it’s all said and done, it’s not a race issue for me, it’s a Gospel issue. It’s a Kingdom issue. We shouldn’t even let isolated issues in themselves hijack the purpose of the church. The Gospel of Christ is so extraordinary that it begins to inform (and we pray, transform) all aspects of our lives. So, in other words, we talk about race and racism because we believe in the Gospel

Tibetan monks visit Ferguson to stand in solidarity with protestors, Antonio French captures it on video. 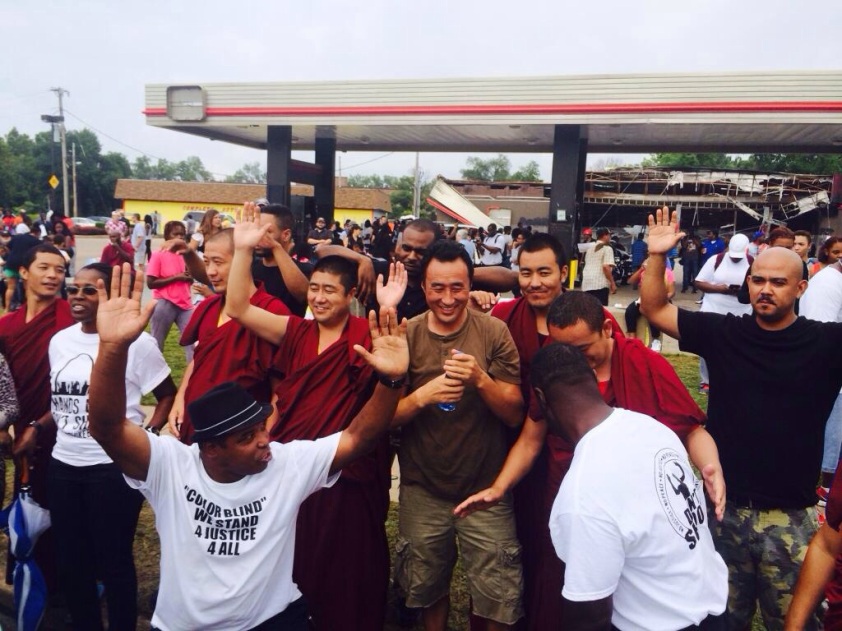